The Length of Colonial Domination (COLYEARS)

It is common to declare the year of the formal declaration of a colony or protectorate as starting point of colonialism. We think this legalistic approach is not adequate to the problem. If political domination is crucial to colonialism, that its onset should be the point in time when political sovereignty was de facto significantly reduced by a foreign power over a significant part of the territory and/or population. This is more often than not before any de jure declaration, and by contrast in certain cases even significantly after this point. As Lange et al. (2006: 1418) point out: “India was clearly under the grip of the English East India Company by the 1750s, but it was not proclaimed a colony under control from London until 1857”. Because Muscat/Oman has never been a de jure colony, Price (2003: 481f) and others consider the country “without colonial heritage”, although there was a Portuguese occupation from the beginning of 16th to mid-17th-century and a de facto British control from mid-19th century on. As colonialism can be a gradual and informal process , its onset might be a unequal treaty called “treaty of amity and trade” with a more or less subtle loss of sovereignty (including e.g. extraterritoriality of foreign citizens, loss of control over foreign policy), the foundation of a major settlement against the will of the local population and/or rulers or the gradual gain of control over government institutions. In Egypt, the UK and France initiated 1876 a stewardship of the public finances that should be considered as a joint form of colonization, even before the country was militarily occupied in 1882. The Ottoman Empire/Turkey is widely considered as historically non-colonized, although it had lost considerable sovereignty through the gradual extension of the “capitulations”-system , the Anglo-Ottoman commercial treaty of Balta Liman in 1838, and, from 1881 on, through the foreign run Public Debts Administration which controlled major portions of Ottoman revenue, there¬by constituting “an enormous incursion on Ottoman sovereignty” (Horowitz 2004). A similar strategy was followed by the British in the case of Persia. Persia and Turkey are discussed in Cain/Hopkins’ British Imperialism: Innovation and Expansion, 1688–1914 (1999) under the title „management without development“ (p. 419ff) – we would speak of semi-colonialism in the political sphere and of financial colonialism as the mechanism of taking over government functions in order to ensure (and to maximize) debt payment (“debt trap”).

For political domination, a certain degree of enduring control over significant parts of the autochthon population is important. Single military attacks with plundering and retreat without the erection of permanent fortresses are thus not coded as the beginning of colonialism. Likewise, a simple trading station or the colonization of an isolated area as e.g. an island offshore or in the delta of a river is not considered as onset. The occupation of James Island in nowadays Gambia by the Baltic Duchy of Courland and later by the British (who even declared in 1760 a British Province of the Senegambia) did not lead to any political domination of a significant inland population and is thus not coded as onset of colonialism. The arrival of the Portuguese in the now Indonesian archipelago in early 16th century cannot be considered as onset of colonialism because they did not manage to establish political control over the “spice islands”. In contrast, on the Malay Peninsula, the Portuguese conquest of the great emporium of Malacca in 1511 clearly signified the onset of colonialism, since it remained despite many wars uninterruptedly under European control well into the 20th century and had a lasting impact on trade flows. Similarly, in Indonesia, colonialism began with the foundation of Dutch-Batavia in 1619 which became the colonial center of trade and administration until independence of the country in 1949. In our sample, colonialism started in 11 countries already in the 16th century, nine countries followed in the next two centuries and most countries followed only in the 19th and some even in the 20th century. However, in most of the latter cases there were earlier contacts with European powers.

Similar to our variable ONSET, we define the end of colonialism (COLEND) as the point in time where the vast majority of the autochthon population regained full sovereignty over internal and foreign affairs, with or without the participation of foreign settlers. At that moment, it should be in principle possible for a country to conclude alliances with whatever foreign power it wants. What sovereignty means is clearly expressed in the words of the Afghan ruler Amanullah in 1919:

“I have declared myself and my country entirely free, autonomous and independent both internally and externally. My country will hereafter be as independent a state as the other states and powers of the world are. No foreign power will be allowed to have a hair’s breadth of right to interfere internally and externally with the affairs of Afghanistan, and if any ever does I am ready to cut its throat with this sword.”

Of course, sovereignty does not automatically mean the end of all political and/or economic dependencies, e.g. in foreign trade and direct investment. It is not important whether foreign administrators are present or not, but whether this presence is decided by the colonial power or by a sovereign government. Foreign military bases, semi-autonomous oil fields or other foreign enclaves tolerated by a sovereign government are for our purposes not considered a constraint of sovereignty. Egypt, again, is a special case: With British troops controlling the most important shipping infrastructure, the Suez Canal, de facto independence came only with the final withdrawing of all troops and Egyptian takeover in 1956. Difficult to assess are the cases where the anti-colonial struggle developed into a war of independence against a post-WWII superpower. Vietnam’s colonial period ended 1956, although complete independence and the restoration of sovereignty came only in 1975. All countries in our sample acquired full sovereignty in the 20th century. 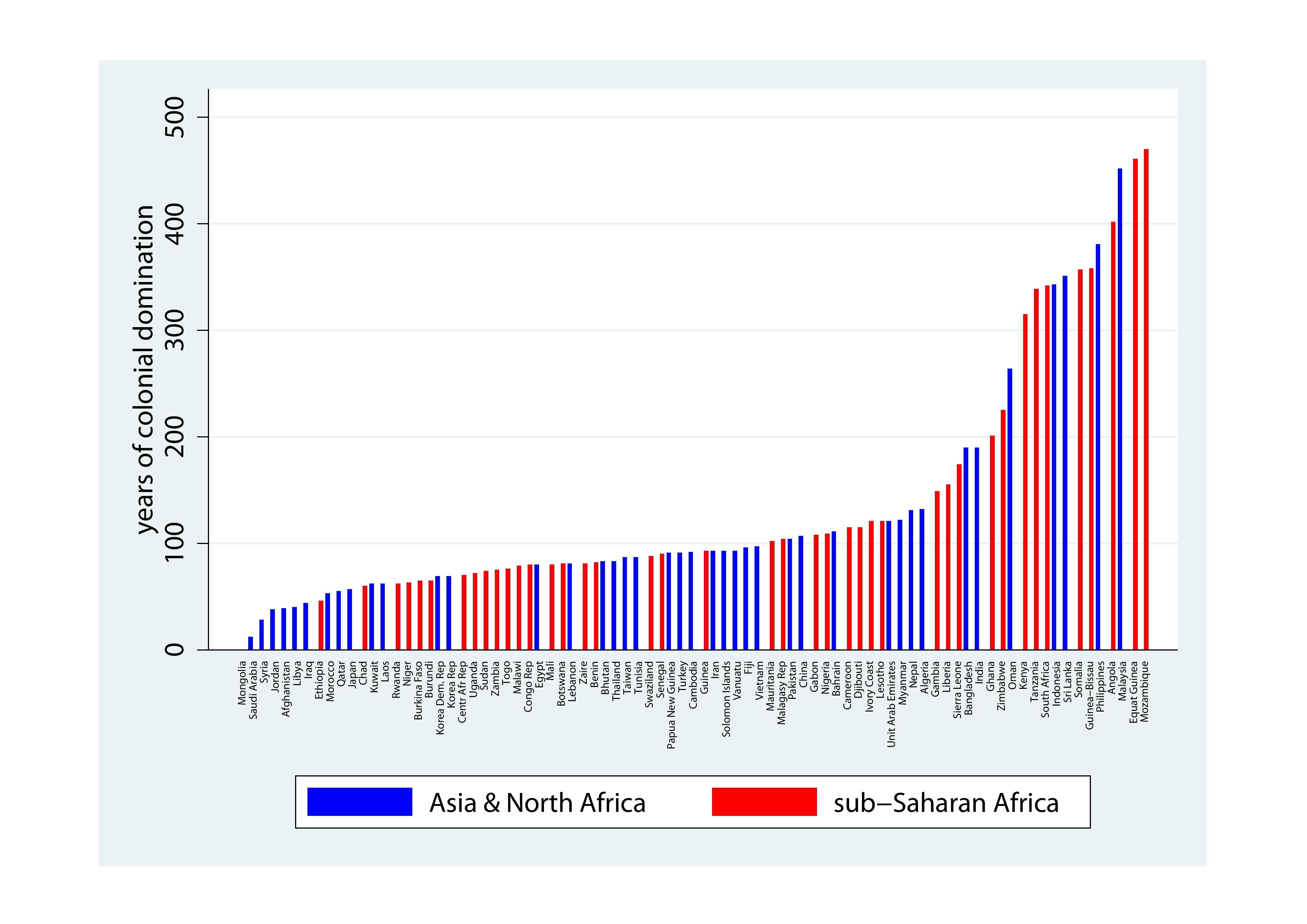 There is no significant correlation between the colonizing country (British vs. French) and the length of domination for the countries of our sample (see 'Descriptive Statistics'). Also, there is no significant difference between the length of colonialism in African (Sub-Sahara) and Asian/North African countries. But the length of colonial domination is related to some economic and social indicators of colonial transformation (level of colonial violence, of investment in infrastructure and of work immigration, the significance of plantations and the success of missionary activities. In short, a longer colonial period means more colonial violence, more investment in infrastructure and more plantations, more work immigration and more religious conversions.