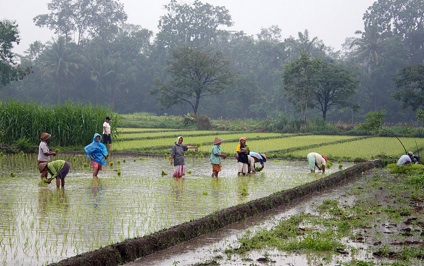 Source of the documents: Atlas of Pre-Colonial Societies (Reimer 1999 - in German).

The Chinese provinces are depicted like countries. The extract shows the names of three provinces: Sichuan, Shanxi and Gansu. The declining population density to the west clearly emerges whereby the Gansu-corridor hints at the railway leading to the industrial center of Yumen. 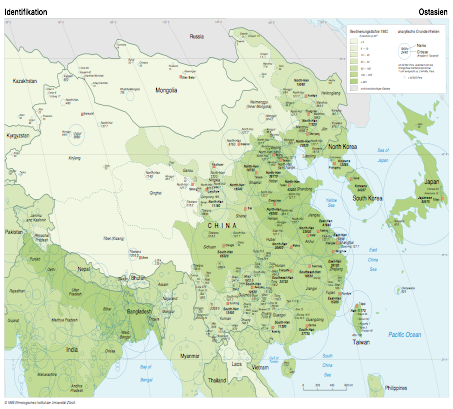 In all areas with higher population density the Han (north-, south, east and west Han) represent the dominant group, clearly outvoting all other ethnic groups. Minorities in terms of language and religion are more prominent in the western parts of China. In the extract, Tibetans and Hui are the most important minorities. 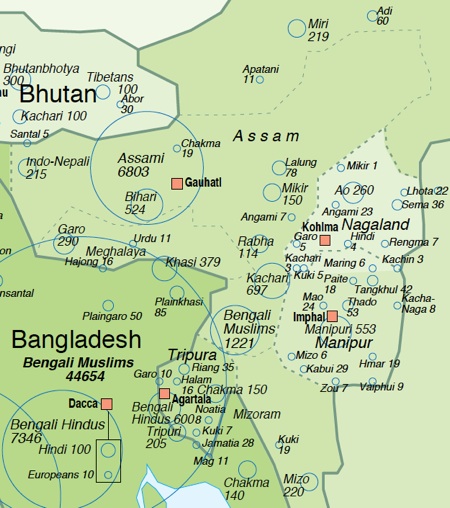 The Indian Federal states are depicted like countries.
The extract shows the Indian Northwest with an atypical weight of indigenous people (adivasi), semi-autonomous districts, hardly scarred over boundaries and recently immigrated minorities.
It should be reiterated that the ID-maps are not ethnic maps in the real sense of the word. The intention of these maps is purely methodological: To establish transparency so that the user of the ATLAS knows exactly, who was coded and what is behind the construction of the national indicators of the cultural heritage.

In view of that end, the naming and splitting of the local units is irrelevant. What must be avoided, however, it mixing culturally different units under one label – different in terms of the ethnic variables of the ATLAS (list). Since the sources used for coding in most cases are ethnographic reports, the resulting picture resembles an ethnic map, but is not. 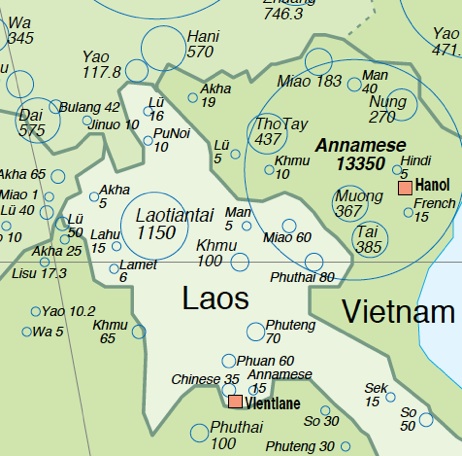 Laos in large part is a thinly populated mountain- and landlocked country. Beside a large number of small ethnic groups, the Laotientai constitute the dominant majority. Within the framework of a leninist nationalities policy, the tribes enjoyed some official support, while at the same time pressed into a rigid system of ethnic categorizations.

The 1985 census listed 820 ethnic groups and sub-groups; in 1995 this number was reduced to 47. In the ATLAS, 23 „cultural units“ are documented, representing 94 percent of the national population.

Characteristic of Vietnam is the gap between, on one hand, the Annamese with their tradition of state organization and wet-rice production, and, on the other hand, the tribal people in the hills and mountains. Due to the shape of Vietnam and her history, the Annamese on the map are split and represented with two equal circles, one in the north and one in the south.

The national indicators of Indonesia are highly biased by the Isle of Java (1960: 63,5 Mio.). The intention was to grasp as much as possible of the internal heterogeneity of the country. Since it was not possible to separately code the many Indonesian provinces on ethnographic ground, the country was divided into eight regions plus West Irian on the map of Melanesia.

Like in India, China and Malaysia, all the data of Indonesia are exposed on two levels: first on the level of the eight regions (Provinces in 1960), second on national level. The boundaries of the regions are indicated by dotted lines.