The section offers answers to the following questions:

In principle, the data are organized by countries. Each of the 95 countries is documented in three ways:

Access to a country and her cultural units is offered through one of the regional overviews in the box on the left or by clicking on the map below. The pdf.-documents open separately and can be consulted simultaneously. For example, by opening the thematic map and an identification map, each point on the thematic map can be identified.

A particularly tricky problem is the definition of the local cultural units. Whenever possible, the term „ethnic unit“ is avoided. Under Methodology(last menu in the box), one finds a discussion of the problem and how it was solved in the ATLAS. The methodology should avoid the problems of demarcation which are so much preoccupying cross-cultural anthropology.

Formal language of the ID-Maps: 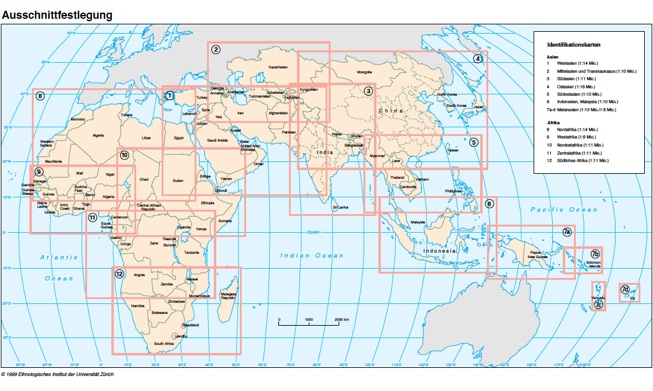 The different shades of green in the background of each country vary with the population density of 1960. For four countries, the demographic information is available on sub-national level:

Source of the identification maps: Atlas of Pre-Colonial Societies.

Each cultural units is marked by a name, a population figure (for 1960) and a circle of a certain diameter, the diameter of which symbolizes the population size. The position of the circle indicates the main area of the cultural unit. Each name appears only once in a country (a province, a federal state respectively) even when the group lives dispersed over several parts of the country. In cases where, around 1960, some sections of the cultural unit lived in urban areas or the capital, the circle was placed in the place of origin. By contrast, foreign ethnic groups like Europeans, Jews or Chinese diaspora are attributed to the national capital. In any case, the geographic localization of the cultural units often is approximate. Accordingly, the map should not be read as a distribution map.

More about the construction of the identification map (PDF, 91 KB)