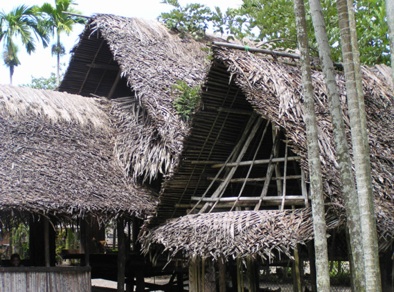 Melanesia is defined on the basis of linguistics: It embraces the islands of the Pacific where the dominant language is neither Polynesian nor Micronesian. Four of the largest island groups are documented in the ATLAS: Papua New Guinea, Fiji, Vanuatu and Solomon Islands (the Molucca islands are part of Indonesia).

In 1960, Melanesia‘s population amounted to less than three million. In the ATLAS they are represented by 112 cultural units. Though this figure may appear to be impressive, West Papua (West Irian) and Papua New Guinea are the only area where less than 50 percent of the national population are identified and ethnographically coded.

Unlike the other ID-maps, the country shades do not display population density, but the geographical distribution of language stocks.

The population of Papua New Guinea exhibit an extreme ethno-linguistic fractionalization. On the political level, no political centralization at all existed in pre-colonial times. On socio-economic ground, the highland in the heart of the country differ from the coastal areas. Also linguistically , the inner parts share kins of Papua phyla while the coastal areas are infiltrated by the Austronesian language family of Indonesia-Philippines at large as well as Fiji, Vanuatu and Solomon Islands.

Inspite of the incomplete cover in the ATLAS, the main features of Papua New Guinea are captured by the 112 cultural units in the sample. All language phyla are included as well as all relevant cultural ecological types. Nevertheless we have to admit that the relative weight of the cultural units in the construction of the national indicators is not beyond doubt as long as the total ethnic universe of Papua New Guinea remains unknown.