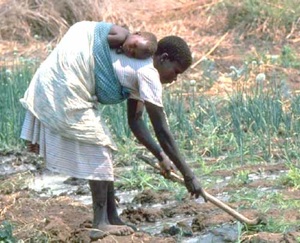 Sub-Saharan Africa comprises four Identification maps (ID-maps) with 41 countries (see the table below). Contrary to the Asian continent, clear-cut cultural majorities are exceptional in Africa. In 35 of the 41 countries coded in sub-Saharan Africa, the largest cultural unit does not reach 5 percent of the national population. Only five rather small countries are ethnically homogenous: Somalia, Swaziland, Equatorial Guinea, Rwanda and Burundi.

Compared to other areas of the ATLAS, the size of cultural units in sub-Saharan Africa (as well as in Melanesia) is clearly below average. This is due, on the one hand, to high ethnic fractionalization since central political institutions usually were absent, fragile or shattered. Hence On the other hand, it is a reflex of a particular anthropological bias for small „tribal“ structures – not entirely coincidental, but not always requested by facts. As a result, ethnic units often show identical codings and could as well subsumed under an overarching label – if there were one.

Map West Africa: Extract of the golf of Guinea 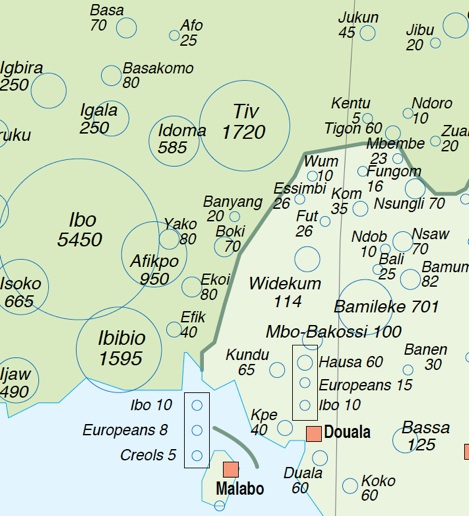 In Nigeria and Cameroon, the three largest ethnic units show about the same proportions of the national population. However, the absolute size differ: In Cameroon, the 17 % Bamileke total about 700‘000 persons; in Nigeria, the 15 % Ibo total about 5.5 million (all figures 1960).

The clip is crossed by a least three different boundaries only one of which is displayed:

The colonial impact on local languages, social organization, economy and law has got deep and long-lasting effects. Since external forces interacted, and still interact, with pre-colonial conditions, „ethnic“ structures and „ethnic“ processes more and more get the result of a common history. 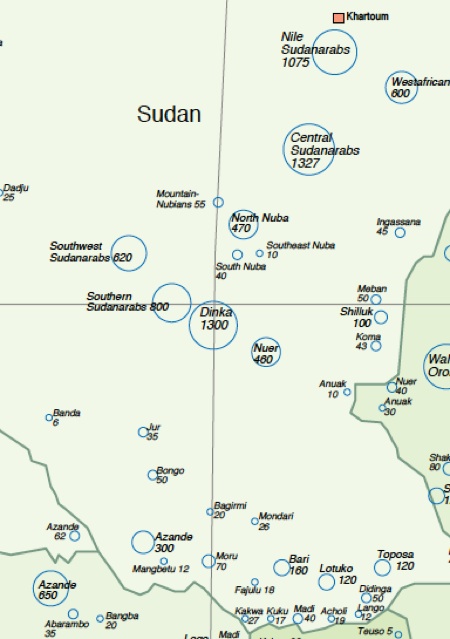 Sudan exemplifies the amount of interpretation in the definition of the cultural („ethnic“) units of the ATLAS. What criteria should be relevant in which situation? 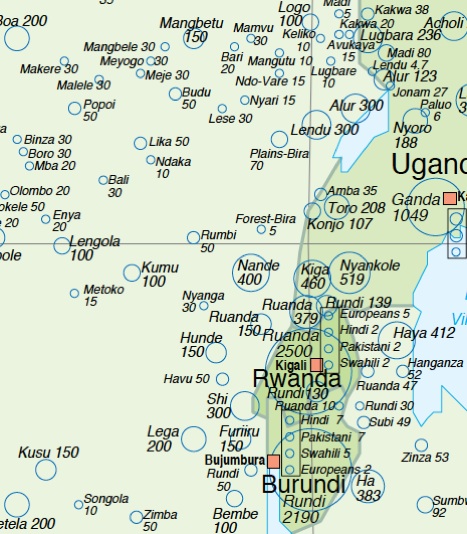 Most noticeable is the high population density in the area, compared to neighboring Zaire and Tanzania. Rwanda and Burundi show one single unit only, representing 100 % of the national population. This may appear counterintuitive in view of the conflicts between Hutu and Tutsi in both countries. The reasons are: 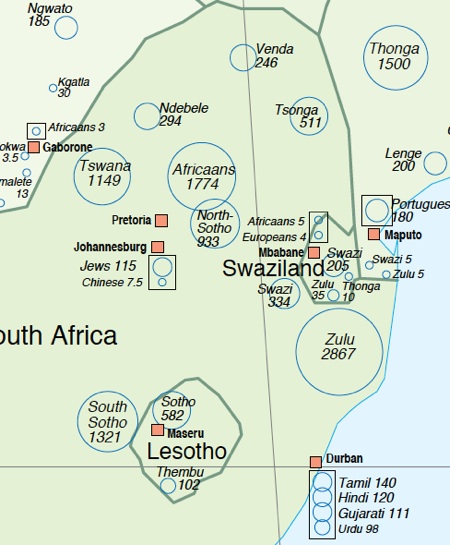 South Africa is a borderline in the sense that the methodology of the ATLAS is struggling to correctly comprehend the social reality and code the indicators of the cultural heritage. The reasons are:

Finally, in spite of these problems, South Africa was included in the ATLAS and the data bank. Based on the statistical results it appears that the coding of South Africa is good enough to produce reasonable results. They perfectly fit in the general pattern of the 95 African and Asian countries.